With its sharp storytelling and bursts of electric guitar, Who Are You Now is Madison Cunningham's coming-of-age record — a diverse album that's modern, melodic, and rooted in the 21 year-old's observations of her own fast-changing world.

"The past year was a largely transitional one for me. It felt like all at once I was living in a new city and anew era of my life, trying to find where I fit, what I believed, and who my people were. It doesn't matter how many great examples you have to look up to, when it’s your turn to face adulthood,you feel like you’re scrambling for the right tools.Writing this record really forced me to take an honest look at where I came from, what my dreams and fears were, and who I was becoming as a result.”

Cunningham began searching for answers during her childhood in Orange County, California. A guitarist since the age of 7, she began performing alongside her father—a worship pastor and lifelong musician—at a local church. By 15 years old, she was writing her own songs and exploring her own voice as a musician. Playing an integral role in that process was Tyler Chester, a multi-instrumentalist and studio guru who'd worked with artists like Jackson Browne, Blake Mills, and Andrew Bird. Later, after leaving home and moving to Los Angeles, Cunningham's list of champions grew to encompass the likes of Sara Watkins, Chris Thile, and the Milk Carton Kids' Joey Ryan.

"When I met 15-year-old Madi and she played one of her early songs for me, it struck me within the first 15 seconds that I was witnessing one of the most purely musical human beings I would ever meet," says Chester. "She was young and her skillset unrefined, but already at her core was that same unteachable magic that you hear amplified in her today."

Hawktail is the instrumental acoustic quartet of fiddler Brittany Haas, bassist Paul Kowert, guitarist Jordan Tice, and mandolinist Dominick Leslie. Though at first glance it looks like an acoustic superpicker side-project, their all-original music is cohesive and unique, distinguishing them as an ensemble with a sound built from the ground up. Flush with orchestral sweeps and sparse vigils, with strains of the American South and the North Atlantic, this cosmopolitan sound is not what you’d expect from a string band.
​
Each member of Hawktail brings a strong individuality to the project. Haas, whose 2004 self-titled release instantly became the touchstone for a generation of old-time fiddlers, has since lent her sound to Crooked Still, Live From Here, Steve Martin, and David Rawlings, where she played alongside Kowert, well known as the Grammy-winning Punch Brothers’ virtuosic bass player. Tice is a rare guitar player whose music showcases his unique identity and a particular knack for song and tune-writing, and Leslie is a versatile mandolinist whose rhythmic sensibility has made him ubiquitous on the acoustic music scene for over a decade. However, despite each of their ability to contribute to many musical situations, something special happens when they unite as Hawktail. Together, they have fostered a reputation as a rare ensemble of composers and instrumentalists able to take the listener on a journey, without the use of words. 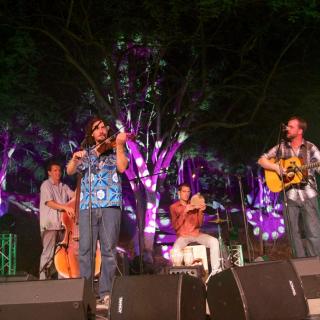