The past is relevant today at these key spots in Shenandoah Valley’s southern gateway.

If you think of museums as dusty collections of relics, think again. These must-see stops in Lexington, Virginia are more than a rainy-day excuse to peer at curiosities. At these museums, curators make the past come alive in ways that are meaningful today. Look closely and the past is like a map to the future.

The only home ever owned by General Thomas “Stonewall” Jackson is located in historic downtown Lexington. Before General Jackson marched into history, however, he lived in Lexington as a private citizen for a decade (1851-1861). In those days, he worked as a professor of natural and experimental philosophy and a military tactics instructor at Virginia Military Institute (VMI)—parts of his curriculum are considered timeless military essentials that are still taught at VMI! Jackson and his second wife, Mary Anna Morrison, purchased this home in 1858 and kept a kitchen garden in the backyard. Now a museum, its focus is life, not war. “We are the only site in Lexington telling the story of family life on the eve of the Civil War,” says Major Grace Abele, site director. “This personal side of history is very relatable. We’ve all watched people go off to war. We’ve all suffered losses.” Tours showcase the home and furnishings as well as personal details about the lives of its residents, including the Jacksons’ six enslaved African-Americans. Staffers have done extensive research to learn more about the slaves, since understanding the past can inform current conversations about race relations.

The house served as the city’s first hospital (1906-1954), mayor’s office, and police station—today, a new orientation center, museum store, and exhibit space have been constructed next door to make more space inside the home available for exhibits about its history.

Visit during the school year and odds are you’ll see some of the college’s 1,700 cadets—both men and women—on campus, proof this is a vibrant modern-day place. The museum houses a collection of 15,000 artifacts from throughout its past, from a Revolutionary War musket to seven Medals of Honor awarded to VMI alumni. The firearms collection includes more than 450 rare and one-of-a-kind pieces. Artifacts from Thomas “Stonewall” Jackson include his favorite hat, two uniforms, and items from his classroom. The nation's first state-sponsored military college boasts an impressive roster of graduates, including Rhodes Scholars, Secretary of State, Supreme Court Justice, Nobel Prize recipients, Pulitzer Prize winners, explorers, film stars, national, plus state and local political and civic leaders. Cadet-guided tours are offered daily when school is in session, starting at Noon and lasting approximately 50 minutes (call to confirm availability).

The Museums at Washington and Lee University

University Chapel & Galleries
A National Historic Landmark, the Chapel opened in 1868 during Robert E. Lee’s tenure as 11th president of then Washington College. Non-denominational and unconsecrated, the Chapel housed an auditorium, administrative offices, a YMCA, and a library. In 1928, a museum was installed in the basement. Today, that museum includes an exhibition on the history of the university, a changing exhibition gallery, and a museum shop. Visitors also see Lee’s 1870 president’s office and Edward Valentine’s Recumbent Lee statue.

The Reeves Museum of Ceramics
The Reeves showcases one of the country’s largest and finest collections of ceramics. Hundreds of pieces of Asian, European, and American ceramics spanning some 4,000 years tell stories of design, technology, and trade and illustrate how people drank, dined and decorated their homes over the past five centuries. The collection is on display in the Reeves and in the adjoining Watson Galleries and is used in a wide range of university classes including art history, chemistry, and politics. Also located in the Reeves is the Elisabeth S. Gottwald Gallery, which highlights the work of Louise Herreshoff Reeves (1876-1967), an early-20th century American painter noted for her Impressionist and Fauvist works.

Watson Galleries and Japanese Tearoom
The Watson contains a permanent display of Chinese and Japanese ceramics and two changing exhibit galleries that showcase rotating selections from the fine arts and ceramics collections. In addition, the Watson houses Senshin'an (洗心庵 or "Clearing-the-Mind Abode"), an authentic Japanese Tea Room that is open for viewing, as well as public tea demonstrations throughout the year.

This little two-room museum, located 18 miles north of Lexington, packs a lot of interest into its space. In one unassuming corner hangs one of the oldest color photographs in America, circa 1903. The photographer, Michael Miley, is best-known for his photographs of Robert E. Lee on his beloved horse Traveller.

Striving to connect the public with the history, arts, and culture of Brownsburg and the surrounding area, “Cradle to Coffin: Remembering the Country Store” continues and even expands upon that tradition with an exhibit that not only fills both rooms of the small museum, but spills out onto the front and back porches—just like the jammed-packed stores of the past.

Your dive into history doesn’t have to end with those museums. At Cyrus McCormick Farm you can enjoy a picnic in a picturesque setting then tour a barn with exhibits about the invention of the grain reaper that started the mechanical revolution in agriculture.

At Wade’s Mill see the oldest continuously operating commercial grist mill in the Shenandoah Valley, where local grains have been stone-ground in the traditional way since 1750—plus purchase grits, cornmeal, flour and other treats to take home.

For help planning your visit to Rockbridge County, Virginia, explore www.lexingtonvirginia.com and www.rockbridgeoutdoors.com, or call 540-463-3777. 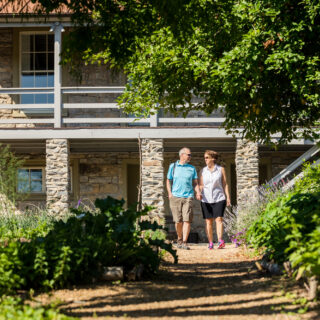 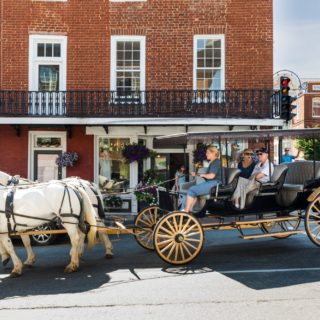