Renovations and resurfaced slave stories are the highlight of the Summer 2018 unveiling of the new experience at Stonewall Jackson House.

The 1801 house was the only home ever owned by Thomas Jonathan "Stonewall" Jackson. He and his second wife, Mary Anna, occupied the home during his tenure at Virginia Military Institute. When he departed Lexington on April 21, 1861 to report for duty in Richmond with the VMI Corps of Cadets, it was his last time.

Over the years the home at 8 E. Washington Street served many purposes, including those of a boarding house and the Stonewall Jackson Memorial Hospital before finally becoming a museum in 1954. The Stonewall Jackson House interprets the life of the Jackson's between 1859 and 1861. 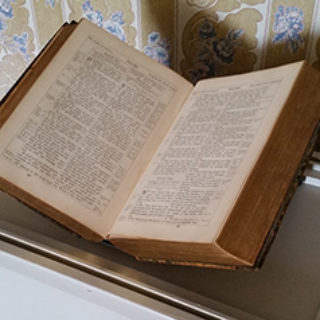 When repeat visitors arrive on and after April 15, they will enjoy a new experience.

Once renovation are completed next door at the 1887 Davidson-Tucker House, the Jackson House Gift Shop and Orientation Center will be relocated in the new 1,500-square-foot expansion (to be completed in June 2018).

Hetty, George, Cyrus, Emma, Amy, and Albert have always been referenced at the Jackson House, but their stories have further developed thanks to extensive research. Now visitors will have a more robust telling of the Jackson's slaves through exhibits and the narrative offered during the guided tour.