See one of the world’s most unique roadside attractions in Rockbridge County, Virginia.

Ever wonder how the Civil War might have gone if dinosaurs had been part of the action? Or, more likely, this oddball idea never crossed your mind, but now the suggestion has you intrigued? Dinosaur Kingdom II is the place to satisfy the curiosity.

Located in Natural Bridge, Virginia, Dinosaur Kingdom II is a one-of-a-kind display of fiberglass art. Recently named the “Best Roadside Attraction in Virginia” by USA Today 10Best, it offers the chance to walk among life-sized dinosaurs and ponder alternate history.

For an insider’s perspective into this mind-bending cultural phenomenon, we talked with its creator and owner Mark Cline.

What is Dinosaur Kingdom II?

First of all, don’t expect your grandfather’s dinosaur park. It’s a roadside attraction like those you might have seen in the 1960s, 1970s, and early 1980s, yet it has a more modernized twist. A lot of roadside attractions have disappeared, this is very unique in that it exists at all.

It presents an alternate history of the Civil War—because 60 percent of the battles in the Civil War took place in Virginia, I thought this is the ideal place to do something like this. Frankly, who doesn’t like dinosaurs? So I mixed them together to create one of the world’s most unique roadside attractions.

What is there for a visitor to do at Dinosaur Kingdom II?

It’s self-guided; you create your own adventure as you go through—if you miss anything, it’s your own fault. Your adventure begins in the parking lot where you see a huge wooden fence made out of telephone poles, which implies something big is kept behind there. You buy tickets at the train station, enter the train that turns into a time tunnel that catapults you into an old barn in 1864, then go into an old mining town, and then into Extinction Junction.

There are no dinosaurs yet, but you see eggs about to incubate that are moving—you see implications that something happened here, which you’ll have to discover. You hear dinosaur growls in the distance. As you enter the woods through a giant ribcage you see Yankees are trying to use dinosaurs as weapons of mass destruction, which is not working out too well for them. I’m a storyteller: I want people to come in and use their imaginations. As in any story, you interpret on your own as you go through.

This is different than any other attraction. You can go into different buildings where unique things are happening. One has a shoot-out with Bigfoot every hour and a half. Bigfoot comes out on stage and you shoot at him with water cannons. Kids absolutely love this, but the thing is that halfway through the show you realize that Bigfoot shoots back and water sprinkles the town. It’s all done with background music of the William Tell Overture (the theme from the “Lone Ranger”).

So it’s interactive, as well as a place to see sculptures?

I wouldn’t quite call it a theme park, but it is more than a roadside attraction—something in between. It’s an adventure you make your own.

But you should be prepared to get wet?

We’ve opened up a new maze called the Mazeozoic Error. We built a new indoor section, the Dinosaur Dungeon, but we’re keeping it closed for now because of coronavirus—it will hopefully open next year. We’re always doing new things in the park. I strive for new and unique things you’ve never seen anywhere else. Mine is the only dinosaur park where you can feed a dinosaur and pet a dinosaur. One of the things we are planning to do to grow our audience next year is stage a bullfight with a Tyrannosaurus and matador with Mexican music playing.

How big is Dinosaur Kingdom II?

It’s on 16 acres, but I haven’t used up all 16 acres. I’m planning on expanding on other ideas.

There was an original Dinosaur Kingdom down the road. We were partners with Natural Bridge; it was sort of a way to alleviate the time waiting in line with entertainment in the woods. Dinosaur Kingdom became extremely popular. It burned down in 2012. We went in, cleaned up the dinosaurs, put them in hibernation. When there was an opportunity to bring them out of extinction, we jumped all over it and opened Dinosaur Kingdom II in 2016.

How did you get into this?

I’m just a kid from Waynesboro, Virginia, who had a big idea. I’m not trained, didn’t go to any entertainment schools for art. But now I do work all over the world. I’ve got a fiberglass dinosaur that I built in 1985 that’s still standing in the same place—the pieces I built in those days when I was just learning about fiberglass are still holding up, and the pieces I make today are made of more superior materials.

Are visitors allowed to take pictures and videos?

Yes, they’re encouraged to. In fact, a few displays have QR codes—we’re modernizing the old-fashioned roadside attraction. You can scan the code with your phone and open up a video to see that scene play out. As one example, there’s a Yankee soldier with a one-legged dinosaur standing over him.

On the video you can see what happened there is that the soldier was running, got one leg caught in a trap, then looks up to see the dinosaur coming at him, so he reaches for a gun. It’s important to note that none of the characters in my park are actually getting killed. Nobody’s getting killed and none of the dinosaurs were harmed in the creating of the park.

The park is dog-friendly?

Yes. Oddly enough, there’s only one display that dogs don’t like and it’s not a dinosaur, it’s the donkey sculpture. Not all dogs snarl at it, but it’s a really amusing evolutionary thing that when some dogs see the donkey it freaks them out.

What was your inspiration?

My first inspiration was the movie “Valley of the Gwangi,” which came out in 1969. It was about cowboys rustling up dinosaurs—it’s the “King Kong” formula that never fails. It inspired me when I was a kid. I planned to build my own dinosaur park and didn’t give up on the childhood dream. Another big inspiration to me was Dinosaur Land in White Post, Virginia. I used to go there with my parents—these days there’s a whole section of dinosaurs I’ve built for them, sort of a dream come true having gone there as a kid.

Anyway, one day when coming back from Baltimore with my dad I begged him to stop. It was closed but we were standing outside looking through the fence and could see the dinosaurs. I said to my dad, “I’m going to build these one day.” He said, “Son, if that’s what you want to do there’s nothing that can stop you, except you.” What he said really soaked in.

What protocols are in place during this coronavirus pandemic?

We are open. We are outdoors and 90 percent of it is under shade trees. People are pretty respectful of keeping distance. The only time we encourage masks is when you’re purchasing tickets, but once you’re through the time tunnel you are free to take them off and enjoy the park.

See three attractions and save on entry fees with a combo pass that includes admission to Dinosaur Kingdom II, Natural Bridge Zoo, and Natural Bridge Caverns. Combo passes are priced at $39 per adult and $23 per child.

Dinosaur Kingdom II is just one of the many fun reasons to visit Lexington, Virginia. 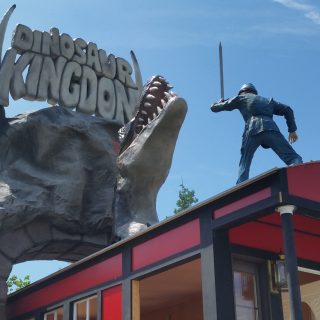 At Dinosaur Kingdom II, visitors will be transported back to the Civil War—with a prehistoric twist! Realistic, life[…] 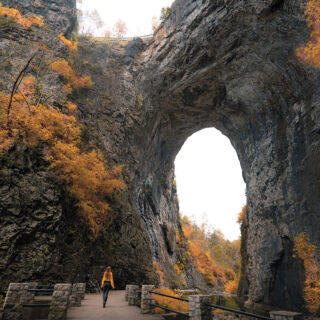