Fresh air. An uphill climb to get your heart pumping. A natural formation unlike anything you’ve seen before. Unobstructed views of the horizon. These are just a few among the many reasons Devil’s Marbleyard frequently makes hikers’ must-do checklists. You won’t want to miss it.

As soon as you see it, the name makes perfect sense: It can be described as a jumble of white boulders ranging in size from suitcases to vans; it’s one of the boulder fields that can be spotted on the Blue Ridge.

It came to exist over a long period of time and natural events. “Hundreds of millions of years ago there was a sandy beach bordering an ancient ocean,” says Tom Collins, Forest Service geologist. Over time, the beach was buried under thousands of feet of other sediments and the sand compressed into hard sandstone or quartzite. Geologic forces lifted land and eroded sediments, exposing the bedrock. During the Ice Age, freeze-and-thaw weather patterns broke it into big blocks. “Look carefully and you may see small dark circles on a rock surface,” says Collins. “Those are fossilized worm tubes from the ancient sandy beach.”

Multiple hiking options include Devil’s Marbleyard, making it an appealing destination for hikers of various levels. Whether you prefer a route that’s as short or as challenging as possible, start your hike at the Belfast Trailhead. Devil’s Marbleyard is one mile from that point. Fair warning, it’s a steep and rocky mile that’s rated moderate to difficult.

However much you may sweat and huff along the way, it’s worth the effort. In addition to the scenic outcrop of boulders itself, Devil’s Marbleyard boasts breathtaking views of the valley below. It’s a place to marvel at our planet’s wonderous diversity and ability to surprise.

From the Marbleyard, you might turn back to your car and call it quits or continue on. Trek the full 2.3-mile Belfast Trail climbing from 1,000 to 2,517 feet then turn around for a 4.6-mile hike. Connect to the Gunter Ridge Tail for an 8.3-mile loop. Make it an 11.3-mile adventure by adding a three-mile hike along the famed Appalachian Trail to reach the “Helicopter Pad,” one of the most spectacular 360-degree panoramic views in Virginia.

The trail passes Devil’s Marbleyard. “Many hikers are not aware that the trail goes around the edge of the Marbleyard versus through the rocks,” says Lauren Stull, district ranger for the George Washington & Jefferson National Forests.

Belfast Trail passes through the remains of an old Boy Scout camp and crosses then follows Belfast Creek on its way to Devil’s Marbleyard. Abundant wildflowers (depending on the season of your visit) are also among its attractions.

Of course, a place like Devil’s Marbleyard inspires legends. In one local tale, once upon a time the land was green and lush. A large stone altar that was used for worship on full-moon nights stood at the top of a peak. One night a storm gathered overhead. Lightening struck the altar and its stones tumbled down the mountainside.

Nowadays, preservation and conservation are key values. “The Southern Appalachian Wilderness Stewards Organization has completed a number of volunteer projects in the wilderness and along this trail,” says Stull. “Recently, the group helped the Forest Service remove graffiti painted on the rocks by disrespectful visitors.”

Know Before You Go…

Devil’s Marbleyard is just one of the many great reasons to visit Lexington, Virginia. 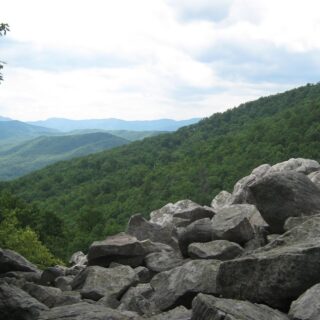 This hike is a compilation of a few legs pieced together; the Belfast Trail and Devil’s Marbleyard connect with Gunter[…] 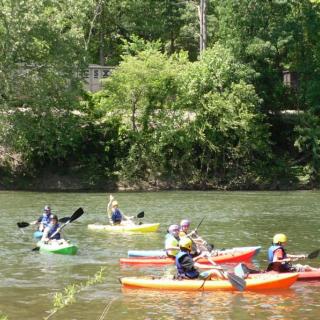 Float, paddle, play and relax as the James River gently takes you to Snowden from Wilderness Canoe Company. 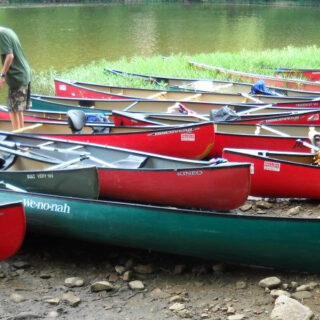 Float, paddle, play and relax as the James River gently takes you from Alpine to Wilderness Canoe Company.