A New Home for Foamhenge? 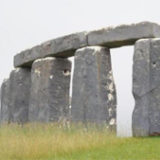 MAY 1, 2016 Mark Cline's Foamhenge sits on property that will be soon known as Natural Bridge State Park. In his interview with Bill Lohmann of The Richmond-Times Dispatch, Cline said, "It’s a world-known tourist attraction. It’s been on the BBC and the Discovery Channel, been in several books. It was on ‘NCIS’ last year, and it appeared as an answer on ‘Jeopardy!’ the year before. It’s become quite a foam-nomenon, so to speak.”

There is good change coming for Mark Cline, however, in the way of his new Dinosaur Kingdom II, a brand new attraction on 15 acres across from the Natural Bridge Zoo.