During this period of social distancing, we encourage you to get outside and exercise responsibly. Please don't overcrowd trails and practice Leave No Trace principles, including packing-out trash. It's everyone's job to be a good citizen.

Snow on the Blue Ridge Parkway

The Blue Ridge Parkway is closed. For literally hundreds of miles, north and south, snow blankets the pastoral road leaving an unmarred ribbon of white tracing the crest of the Blue Ridge Mountains.

There is no human sound, no cars, no planes, only the soft sound of falling snow – which is no sound at all. I stop and rest, the cloud of my breath mixing rapidly with the white air that envelopes the mountain like a cold blanket.

I’ve been here before. I relish this rare winter treat that most folks simply don’t think about – the Blue Ridge Parkway closed for the winter. 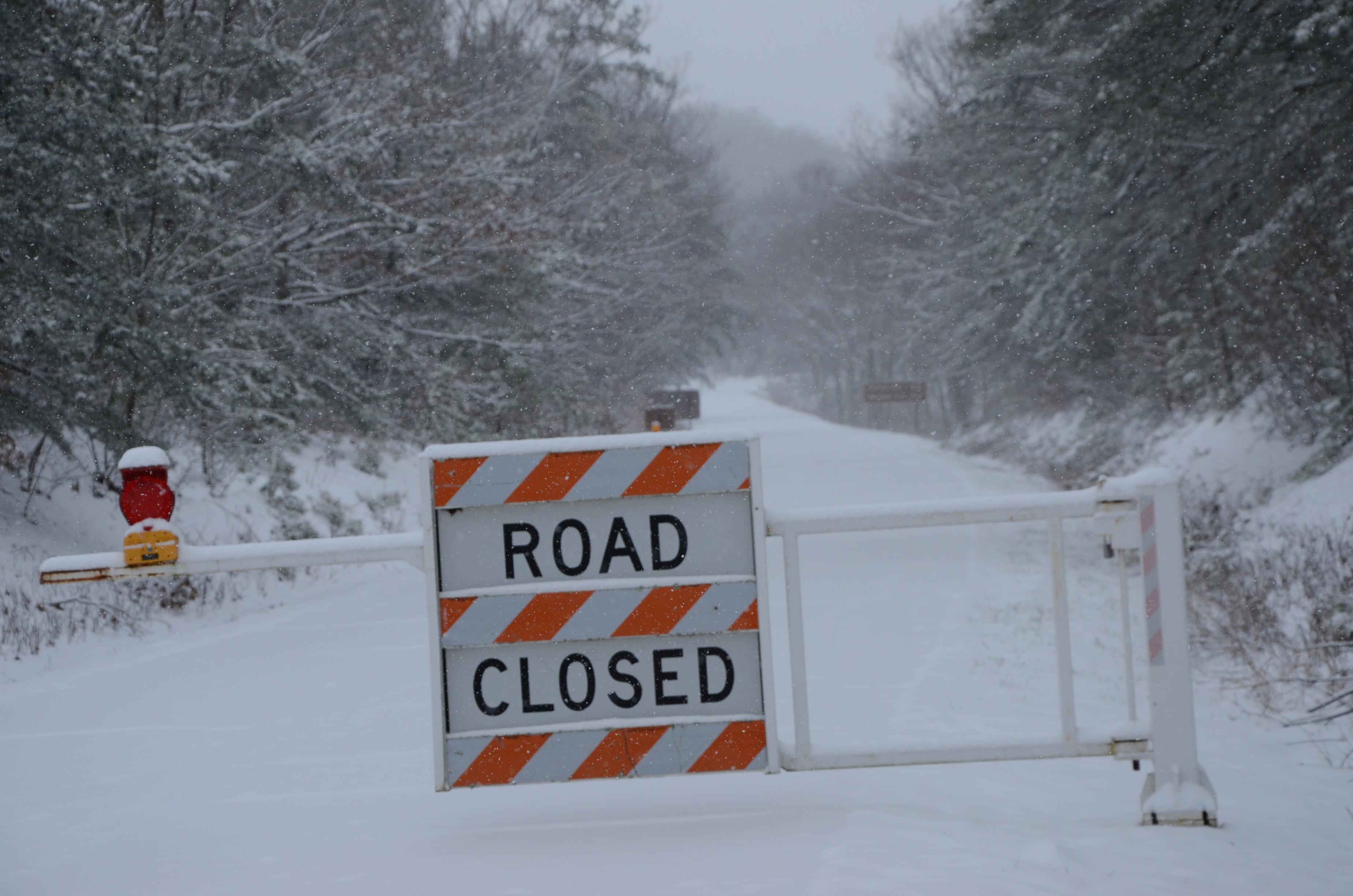 I’m hiking in a snowstorm on the first full day of spring. The visibility is down, but that only adds to the sense of isolation and wild beauty that comes from being miles from civilization with nature herself at the top of the food chain. Tomorrow, after the storm, the Parkway will still be closed. The vistas will return – but not the cars. At least not until the snow melts.

Design and Construction of the Blue Ridge Parkway

"We had better design and build thoughtfully, sensitively, creatively, as we usher men and women into the presence of the natural gods...," said Stanley William Abbott, in 1937. Abbott was the architectural genius behind the construction of the Parkway.

This they did, and today the Parkway sits as though it was always a part of the mountains, carefully designed to provide the best views with the smallest possible impact on the flora, fauna and feel of this wild and isolated country.

After the first winter snow, the road is allowed to rest without maintenance until the spring thaw. During this time, the Parkway provides a pristine, uncluttered pass along the top of the Blue Ridge that very few think about and even fewer use. Yet, it is perfect for hikers looking for solitude, cross-country skiers looking for unbroken trail, and, when the snow is sparse, bikers looking for empty road. 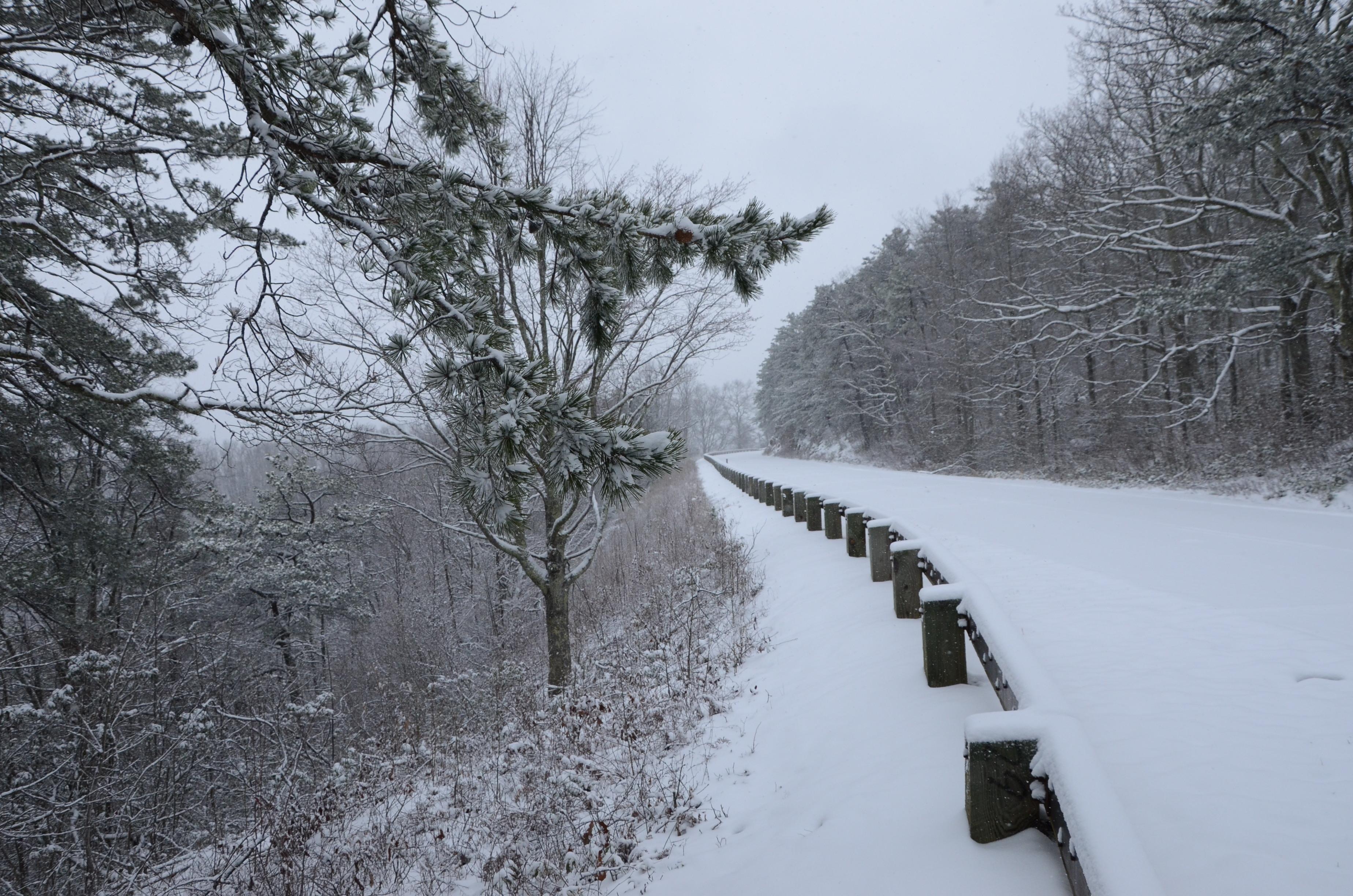 Construction of the Blue Ridge Parkway began in 1935 as part of President Roosevelt’s plan to re-ignite the economy through government projects. Assigned to the newly formed Civilian Conservation Corps (CCC), the construction provided jobs and training for unemployed men in conservation related fields. Roosevelt wanted a scenic road that would connect the Shenandoah National Park with the Great Smoky Mountains National Park in North Carolina.

When construction began, much of the area had been devastated by uncontrolled logging and clear-cutting. Nearly all the traditional mountain people had moved away - their mountain homes left to ruin. Most of the traditional cabins you see along the Parkway today were moved there during construction. The wonderful stone bridges, dams and other structures are, for the most part, built with modern materials (concrete and steel) and then covered with natural stone facings to insure a traditional mountain character.

It took 52 years (with a break during WWII) for the CCC to blast the 26 tunnels (only one in Virginia), build the dozens of bridges, and construct the hundreds of scenic turn-offs. The result, however, was well worth the wait. Today, the Parkway fits so well into the natural surroundings that Mother Nature might think of it as her driveway.

According to the Parkway website, one Congressman, back in 1935 called the project, “…the most ridiculous undertaking that has ever been presented to the Congress of the United States.” But the more than 600 million nature lovers who have discovered the serenity this pristine road provides might disagree.

At the Irish Creek pull-off, a high ridge to the west blocks the view of the small towns that dot the lower end of the Shenandoah Valley. Instead, the best view is to the south, along the axis of the wooded and snow covered mountains that stretch to the horizon. There are no signs of civilization in this direction and visitors are awestruck with the wildness of everything within view.

The Blue Ridge Parkway is open to hikers year round from any of the normal on-ramps available the entire length of the road. You can reach the area described here by traveling east from Buena Vista on Route 60 for about three miles. Near the top of the mountain is the well-marked entrance. Drive right up onto the Parkway until you meet the barrier fence. Don't block the gate – Park service vehicles need access.

This is isolated country. Be sure to tell someone where you are going and take a partner – it is more fun anyway. The weather up this high (2,500-3000 feet) is always more severe than in the valley. This time of year, rain in the valley means snow on the mountain and temperatures will be 5-10 degrees cooler. The wind is always blowing and can be up to four times as strong as it is in the valley, often plunging wind chills to below zero. Take water and energy food. Wear layers. Cell phones will generally work thanks to the elevation, but the cold can kill a battery in half the usual time.