During this period of social distancing, we encourage you to get outside and exercise responsibly. Please don't overcrowd trails and practice Leave No Trace principles, including packing-out trash. It's everyone's job to be a good citizen.

Great Fall Hike for Newbies on the AT

The wind blows in gently from the north, causing the water below the bridge to ripple ever so slightly. The weatherman says it will be a chilly weekend. Dry leaves blow into the river and begin their journey to the sea. A pinch of color is starting to paint the mountains that surround me.

Halloween has come and gone with Thanksgiving following close behind. Visitors from all over the country are flocking to our mountains just to see if our bragging is true. Many want a chance to hike the famous Appalachian Trail. Just one problem – they aren’t really up to a strenuous hike.

No problem. I already have the hike planned.

The Longest Pedestrian-Only Bridge on the Appalachian Trail

They can pull off the road right onto the trail where it crosses the James River by footbridge. From there, they can take a four mile (or less), out and back hike south on the Appalachian Trail. 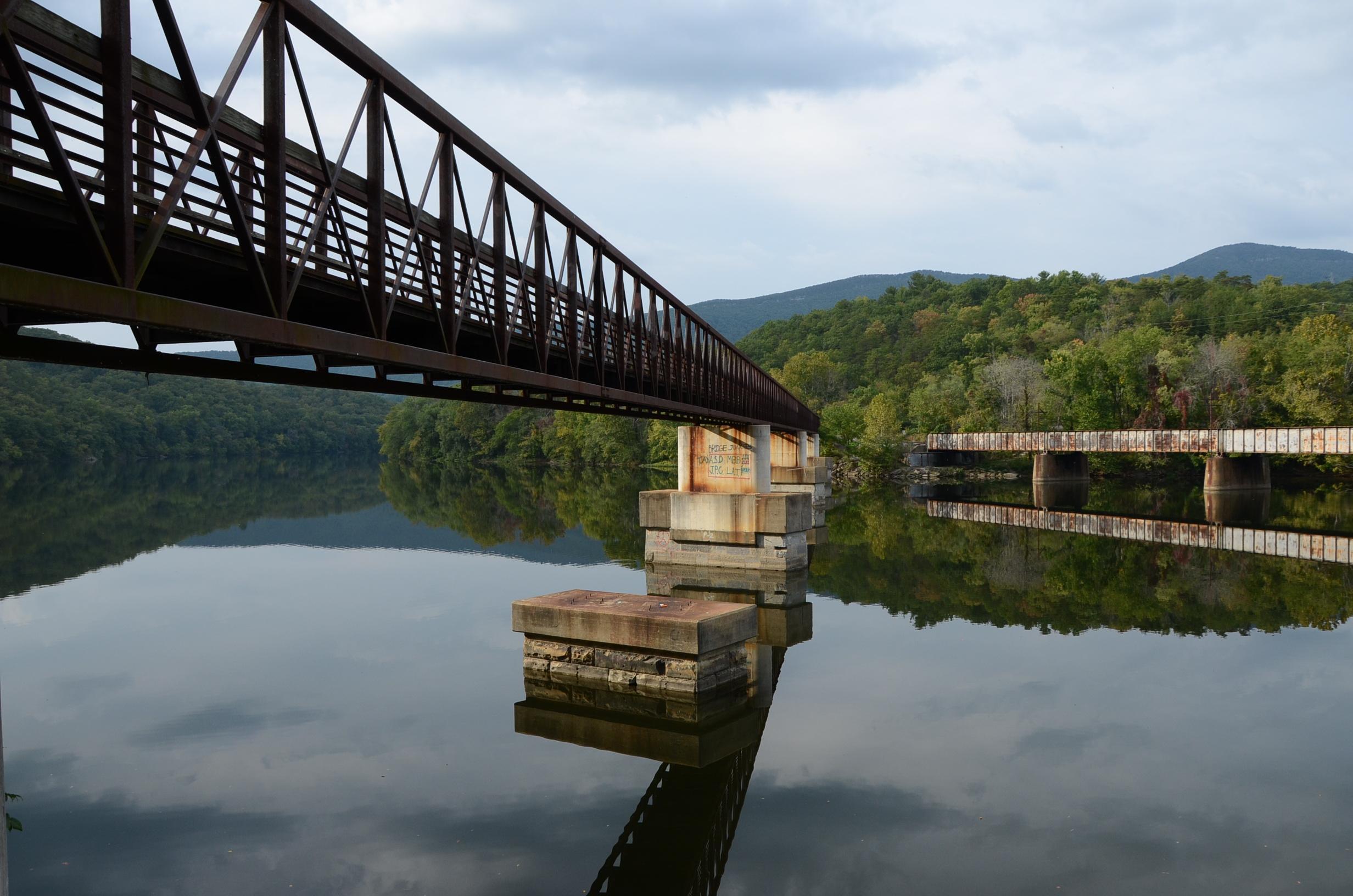 On this section they will discover some of the history of the trail, the beauty of its vistas, the deepness of its woods, the occasional roughness of its trails – and find it all be on a nearly flat hike for the entire route – thanks at least in part to the James River Foot Bridge.

It's All in the Name

After through hiking the Appalachian Trail in 1987 with his wife Lauri, Bill foot made it his passion to improve the trail because, according to his wife, “he wanted everyone to be able to enjoy the trail as much as he did.”

Note: Pictured below is the youngest through-hiker ever on the AT! Read more about Ellie in the Fall 2017 issue of Life Outside Magazine.

Foot spent the last years of his life, raised $1.5 million (another story in itself) and they built the bridge. In doing so, they dropped 2 miles off the trail, got rid of a dangerous bridge crossing, and created a wonderfully scenic and mostly flat section of Appalachian Trail that almost anyone can enjoy. As a bonus, it happens to sit on one of the most beautiful sections of the trail.

October 14th is the 17th anniversary of the dedication of the Bridge. Bill did not attend the dedication. He had passed away the previous spring never having crossed the bridge that bears his name. His wife Laurie now continues his legacy of bringing the Trail to everyone.

Lauri says that Bill had preferred that trail shelters and structures be named after geographic regions rather than people. So it was lucky that they happen to be named “Foot.” Thus the name- The James River Foot Bridge.

The James River is your Constant Companion

For many, just walking the bridge is enough. The next mile south, however, is also a wonderful section of trail that follows gently along the river bank until turning up the mountain about a mile from the bridge.

This section is more traditional AT with rocky paths and occasional short ups and downs that generally keep you just above the level of the river. Towering rock faces stretch from the trail to out of sight on the southwest side of the trail. The James is your constant companion on the northeast side. The river is magical at the end of the day when the setting sun makes the water sparkle. Is the perfect hike for those who would experience the Appalachian Trail without having to climb a mountain.

Keep in mind, however, that at this time of year, with the sun setting early in the West, this trail along the east side of the ridge gets dark. Plan ahead and make sure you don’t get caught hiking in the dark.

The wind has turned chilly as I return across the bridge back to my car and home. As I take a last long look up river at the darkening ridges, I can’t help but think about Bill Foot. Is he watching and enjoying this magnificent sunset? The water is so calm it creates a perfect mirror of the surrounding mountains. I wonder about his willingness to volunteer the time and effort to a dream that he would not live to enjoy. I wonder if somewhere he knows of the hikers, who, without his bridge, would never experience the magic of the Appalachian Trail. I smile. I think he does.

To reach the bridge from the South come out of Lynchburg on 501 N. After crossing the James River, 501 joins 130 and continues north. Less than ½ mile up on the left-hand side is the parking for the James River footbridge.

If you are coming from the north, take 130/ 501 South. As you come out of the mountain, keep your eyes open for the parking lot on the right hand side. If you go too far you will get to the 501/130 split and know your about a half-mile too far.

This section of the trail is maintained by the, Natural Bridge Appalachian Trail Club. It’s easy access and fantastic fall views make it a popular hike this time of year. Like any wilderness trail, however, the chances of running into unfriendly flora (Poison Ivy) and fauna (snakes and bears) is real. Dress appropriately, watch the weather and be off the trail by dark unless you come prepared for night hiking. Remember, darkness comes early on the east side of the ridges.

and explore by foot, bicycle, boat, or by horsepower. The Rockbridge area offers countless outdoor recreation activities, along with family-friendly attractions, historic sites, and cultural experiences.